Norman grew up on a farm in Crosby County Texas, received a B.S. from Texas Tech University and a M.S. from the University of Arkansas in Agriculture Economics.  In 1982 he obtained a Certificate of Enrollment to Practice Before the Internal Revenue Service.  He moved to Vernon Texas in 1964 working as an Area Economist with the Texas A&M University Extension Service for fifteen years.  During this time he took additional classes in accounting, law and estate planning at Midwestern State University and Texas A&M University and was in the cattle business. He married Sydney Slack while attending Texas Tech and they have three boys.  He loves the outdoors, spending time with family and attending grandchildren’s sporting events.

Clint began working for the firm as a staff accountant in 1986 and now serves as President. He has called Vernon home since the age of 2 and graduated from Vernon High School in 1981. He graduated from Midwestern State University with a Bachelor of Business Administration degree in accounting and became a Certified Public Accountant in 1992.    Clint enjoys watching the Dallas Cowboys and Texas Rangers, golf, fishing, hunting, playing with his grandchildren, and traveling with his wife Dianna.  He has three sons, Kyle, Brandon & Tyler.

Chad began working for the firm in 1991 as an accountant.  Born and raised in Vernon he graduated from Vernon High School in 1985.  Shortly after he moved to the Texas panhandle and worked on his grandfather’s ranch for 3 years.  Upon returning to Vernon he attended Midwestern State University and obtained a Business Administration degree in 1995 and joined the firm as a staff accountant.  He and his wife Adrian have two daughters, Cali and Caitlin.  In his spare time Chad enjoys hunting, golf and attending his daughters many sporting events.

Cathy started working for Clint H Brints CPA, Inc in March of 1989 and shortly after, moved from Crowell to Vernon with her husband, Michael, and their three children, Neal, Amanda and Mary.  She earned Associates in Science degree from Vernon College in 1980.  Cathy grew up in Rhineland Texas and loves outdoor activities and traveling, especially to visit and spend time with their grandchildren.

Debbie is responsible for the day to day operations of the business.  She grew up on a farm in Dallam County Texas and graduated from Stratford High School in 1980.  After High School she attended Angelo State University, majoring in accounting.  She and her husband, Howard moved to Vernon in 1982 where they raised their three children, Brad, Chris and Justin.  Debbie began working at Clint H Brints CPA, Inc in 2000 and enjoys scrapbooking, volunteering at her church and playing with the grandchildren.  She lives by the philosophy of treating others as you would have them treat you. 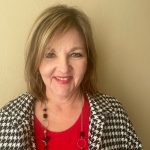 Becky started working for the firm in January of 2020. Becky manages the day to day operations of the firm including bookkeeping & payroll services for our clients. She and her husband, Larry, have called Vernon home since 2015. Becky grew up in Pleasanton, Texas. She enjoys watching the Dallas Cowboys, Texas Rangers and Alabama Crimson Tide. She and her husband enjoy camping & fishing in their spare time as well as spending time with their 2 grown children, Alexa and Adam and daughter-in-law Lindsey and dogs & grand dogs.